Earth Day should be Thanksgiving, not Mother
Earth’s Good Friday, when Extinction’s spectre—
Those ghosts of the Endangered or those Dead
Creatures haunt us—souls polluted by lead,
Mercury, arsenic, acids, and seeds
“Frankensteined” genetically. Live meat bleeds
As it conveyor-belts from plains to plates—
Shrink-wrapped, sporting “Best Before”-stamp, stale dates—
While dolphins and whales, having gulped down our
Plastic garbage and water bottles, lour,
Thrash, and beach themselves, their bellies starving,
And tides turn as red as blood spilled, carving
And serving mad cows or sick swine, all ill
From ingesting strange flesh and/or feces,
Contracted in ponds, scum-green with algaes.
Earth Day should be Eden Revival Day,
Not a “Mayday! Mayday!” Emergency,
When the Apocalypse sounds factual—
Angels strike, and precious seem wine and oil,
And the seas belch up blood, and all fish die,
And sun scorches like fire, so wetlands dry,
And locusts chew roots, leaves, fruits, and Famine
Eats every human down to skeleton,
And skies shine with poison Radiation
Or go dark with choking smog. No nation
Is immune from terra firma that shakes!
One must ask: Does fracking trigger earthquakes?
Ebola, SARS, Swine Flu, Bird Flu,
And other pestilential plagues renew,
Plus West Nile Virus, and other disease—
Infections without treatment, deaths sans cease.
Lethal’s now the baffling kiss of sunlight—
Intricately broken down is skin, white
With pus, putrid with boils, palpably raw,
While tornadoes whirl and swirl, clout and claw,
Oceans go soapy as a laundromat,
Foaming; skyscrapers totter; homes go splat;
A tsunami of trash washes away
Hospitals, leaving unsanitary
Cadavers. Each toxic anatomy—
In obscene inundation—heaps awry.
Oil spills, clear-cut forests, firestorms, sink-holes
Swallowing suburbs whole, are routine tolls
Now, for “Progress.” Condemned seas and damned winds,
Waste lands, Rust Belts, vast contaminations,
Thorns and rubbish, smashed glass, cracked ceramics,
Charred remains, scorched-earth, war-zone Economics,
Bomb-blast disasters ever more drastic,
Atomic threats, arms races elastic,
Ever expanding, is just a short list
Of unpalatable residues unjust,
The catastrophes now making us sick—
Unsustainable—and uneconomic.
Is Capital the acceptable
Villain, or are our choices culpable?
If Mother Earth now faces assassins,
Who are the culprits if not we humans?
This Earth Day demands deliberate turns
Back to Nature: Balance: What each child learns.

Thank you Chris!  Thank you George!   Should be read at every gathering
today.  That should turn us around.      Katherine.

Posted by Chris Faiers/cricket at 07:49 No comments:

Sadly, I feel that Trump is likely to carry out his threat to make a pre-emptive strike against North Korea's nuke facilities. I see both "leaders" as evil neo Hitlers - unlike some of my comrade Vietnam War resisters, who I think still have some faith in the U.S. of A.  Personally I haven't believed there's anything benevolent about the Amerikan empire since my late teens, so the whole hoopla over how horrible Trump is isn't anything new or revelatory to me.

I also have had no faith (pun intended) in any of the major Abrahamic religions since my late teens. My vision is of a new planetary spirituality evolving, pretty much a New Age form of Buddhism.

What scares me in the Trump/Jong un scenario is that if  Evil Pacman Trump successfully "eats" the lesser neo-Hitler by destroying Korea's nukes, then he'll obtain even more dark energy and inflated arrogance. Then when he comes up against more powerful international players like Putin and the Chinese leaders, well, that's when things will get really scary for planet earth.

Oddly, I don't feel strongly affected or upset by current events. I grew up in the shadow of the Cold War, which didn't end until the fall of the Berlin Wall circa 1990. My 1984 poem, Five Minutes Ago They Dropped the Bomb, still accurately reflects my world view, including my spiritual hope for the evolution of mankind and our current mid-state of attaining this. This is definitely a crucible time for young activists in their teens and early twenties, but for us old timers, there ain't nothing much new under the fading politikal sun regarding current world events. Of course the real issue is climate change and the fate of our planet, or at least of human beings surviving on it. Perhaps in some strange karmic way, these dark politikal times are necessary to force the most advanced human beings to become more bodhisattva-like and learn how to face this planetary dharma cakrin ("great wheel turner") challenge. 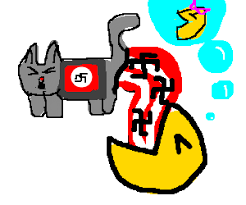 Posted by Chris Faiers/cricket at 19:04 No comments: