At dusk I had an unexpected visitor. After walking her home, I decided to sit on my back deck to enjoy the cooling night air. This summer long heat wave has offered few reprieves.


a toke of local
some swigs of chilled:
Perseids on display

Leaning back to watch the night sky, a shooting star had almost immediately lit a faint path. The Perseid meteor shower of early August. I hadn't consciously remembered them, but some memory had told me to pick this night to skywatch.


A meteor shot from south to north, so low and powerful that I jumped up from the bench. I waited for a crash it seemed so huge and close, but no explosion or burst of light followed. I've never experienced a meteor so long lasting and so close. It didn't have the intense brightness of a meteor, what was it? An intergalactic craft? The power of a dog day night sky, a puff - and amazing things reveal.

Entranced I watched for more entertainment. A satellite cruised the constellations, then another bright meteor lit its dying trail.

An hour of human time drifted by . . .    to the strains of The Velvet Underground 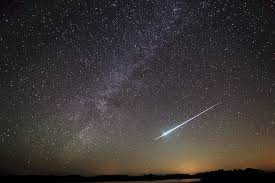 Posted by Chris Faiers/cricket at 04:39 No comments: