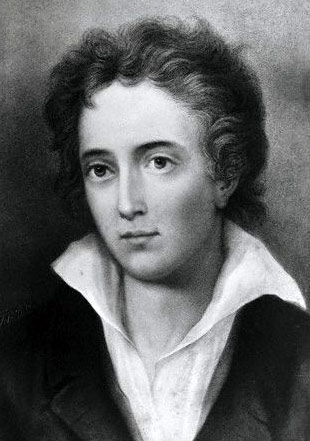 When I was young, Romantic poetry was very popular in China; we read the Chinese translations of Percy Bysshe Shelley’s poems. I remember that everyone liked to quote his lines: “O, Wind, If Winter comes, can Spring be far behind? “ We admired him as a passionate poet with charming lyrics and a revolutionary vision.

The online course THE GREAT POEMS SERIES SHELLEY founded by Eric Alan Weinstein is great and amazing. I believe it takes a lot of courage and effort to set up courses like that. In this fast-paced and cynical world, to teach and to learn Romantic poetry, especially long poems, presents teachers and students with extreme challenges. Most of us lack the patience and motivation for this. When I was preparing this talk, my fellow Chinese poets wondered if there was still an interest in this subject. They believe that Romantic poetry is out of fashion.

Preparing this talk gave me a great opportunity to distill my own thoughts and feelings. I think I have unconsciously regarded Romantic poetry as a timeless blooming tree; I find its roots and fruits are all over the Eastern and Western worlds. Many generations have not only been enlightened by the great ancient Chinese poet LiPo and the Persian poet Rumi, but also have inherited the light from Shelley, Byron and Keats.

When I started writing poetry, I initially wanted to improve my English and have fun. But it turned out that poetry helped me in discovering my inner world and opening up the great world of imagination. My book editor Terry Barker often relates me to the Romantic poets. I hesitated to admit this. I thought that although I looked optimistic and Romantic, in fact, for me, poetry was a way of escape.

When I read the biography of Shelley and his poetry, I could not help reflecting on my own poetic development, the necessity of my poetry journey and also its history. I have learnt that Shelley’s vision was altered over time by the influence of society, science, and other movements. From his first major work, Queen Mab, we can see that he believed that through educated optimism and a visionary approach, the world could be changed into an ideal world.

When we look back at human history, we can see that a lot of movements were initiated by similar thoughts and beliefs. For example the May Fourth Movement in China in 1919 and the Tiananmen Square protests in 1989. We can see that there was a similar idealistic motivation behind them. Like Shelley, young students cried out against the tyranny of all earthly authorities whatever. In Shelley’s next work, The Revolt of Islam, which is an idealized allegory of the French Revolution, we can see his vision has altered. He recognized that the world is not ready to receive the new order where the social law of love prevails until people can reform themselves from the inside out. This is true for China. The Chinese leaders know how risky it could be if a sudden change takes place. Like elsewhere, the reform must be from inside out.

Shelley understood that democracy has a long history and deep roots in Greek soil and Greek mythology. He would like to bring this light to the movement for European Liberty through his long poem: Prometheus Unbound. Yet, he had little faith in the dependability of the common man and he knew from experience too much about the limitations of the public intellect. For Shelley, the nineteenth century political outlook was not hopeless, however. Whatever poetry could do to enlarge the hope or dispel the darkness Shelley set himself to accomplish. Shelley hoped that his visionary poetry was like a mirror which had the power to make his readers admire his idea of divinity, and from admiring it they would imitate it, and from imitating they would identify themselves with the objects of their admiration.

Reading Shelley’s poetry, we can see the narrator is himself admiring the transcendent nature to identify himself with the object of his admiration. This esthetic process – the awakening and enlargement of sympathetic perception, the growing desire to imitate, and the willed development of imitation to the stage of self-identification, lies behind many works of the Romantic poets. They pursue poetry as a source of hope. They believe that that hope will change themselves and others. I remember Emily Dickinson once said “if I can stop one heart from breaking, I shall not live in vain”.

With this kind of hope, I think Romantic poets enriched not only their own lives but that of others too.


In A Defence of Poetry, Shelley explained that poetry acts to produce the moral improvement of the man. As he said, “The great secret of morals is love; the great instrument of moral good is the imagination and the great strengthener of the imagination is poetry.” Thus, poetry can become the tool to heal, to change and to transform. Shelley thinks “a poet is a nightingale, who sits in darkness and sings to cheer its own solitude with sweet sounds; his auditors are as men entranced by the melody of an unseen musician, who feel that they are moved and softened, yet know not whence or why”. As Shelley hoped: Poetry lifts the veil from the hidden beauty of the world. Poetry acts as hope to save the world.

I believe this includes today’s world.

You chose the best inspiration & mentor possible for becoming a poet when you chose Shelley!  I've always been a fan as well, & when I first landed in the UK in 1969 I toured the Lake District. I stayed at a youth hostel with other travellers, & one day several of use hiked to The Derwentwater & rented a row boat. Another day I went for a solo hike in the very hilly countryside. I wandered past a creek and small pond where trout were lazing between nipping bugs off the surface. Then I clambered up the scree of a small mountain (or very tall hill). At the crest I smoked some hash, & then sat in meditation. The legacy of the Romantic poets & the stillness of the Lake District did some magic, and in my stoned world I had the impression I was sitting with Buddhas past, present & future - each little mountain top had a sitting Buddha, and I enjoyed this satori until some passing hikers interrupted my reverie with, "Look, it's the Maharishi meditating." This brought me back to earth, or at  least back to my small mountain top, and I don't know that I've written about this experience since. It should have been a chapter or passage in EEL PIE ISLAND DHARMA perhaps  ;  )

Your piece reads well and true, & I'm know the audience will appreciate it. Following is a limnal* I did on Shelley in the first few months of my blog:

*limnal is a word I created, a composite of limn, liminal, hymnal and perhaps some other words  ;  )

peace & poetry power!
Chris ... & Chase Wrffffffffffffffffffff!  (we're going to visit Jim Christy in Belleville this aft & walk down the Moira River to the Bay of Quinte with  him)
Friday, 10 June 2011

Limnal to Shelley's A Defense of Poetry

(In writing this blog I've noticed how often I've referenced Shelley's brilliant essay from almost 200 years ago. To refresh my personal enjoyment of this great work, I've excerpted the following pieces and titled this homage a "limnal".)

In the infancy of society every author is necessarily a poet, because language itself is poetry; and to be a poet is to apprehend the true and the beautiful ...

Every original language near to its source is in itself  the chaos of a cyclic poem;

Not that I assert poets to be prophets in the gross sense of the word, or that they can foretell the form as surely as they foreknow the spirit of events: such is the pretense of superstition, which would make poetry an attribute of prophecy, rather than prophecy as attribute of poetry. A poet participates in the eternal, the infinite and the one;


A poem is the very image of life expressed in its eternal truth.

Hence epitomes have been called the moths of just history; they eat the poetry out of it.


But poetry acts in another and diviner manner. It awakens and enlarges the mind itself by rendering it the receptacle of a thousand unapprehended combinations of thought. Poetry lifts the veil from the hidden beauty of the world, ...


A man, to be greatly good, must imagine intensely and comprehensively; he must put himself in the place of another and of many others; the pains and pleasures of his species must become his own.


Poetry strengthens that faculty which is the organ of the moral nature of man, in the same manner as exercise strengthens a limb.


The cultivation of those sciences which have enlarged the limits of the empire of man over the external world has, for want of the poetical faculty, proportionally circumscribed those of the internal world; and man, having enslaved the elements, remains himself a slave.

Poetry is indeed something divine. It is at once the center and circumference of knowledge; it is that which comprehends all science, and that to which all science must be referred.


... ascend to bring light and fire from those eternal regions where the owl-winged faculty of calculation dare not ever soar

Poetry is the record of the best and happiest moments of the happiest and best minds.


... they (poets) can colour all that they combine with the evanescent hues of this ethereal world ...


It creates anew the universe,


The most unfailing herald, companion, and follower of the awakening of a great people to work a beneficial change in opinion or institution is poetry.


Poets are the hierophants of an unapprehended inspiration; the mirrors of the gigantic shadows which futurity casts upon the present; the words which express what they understand not; the trumpets which sing to battle and feel not what they inspire; the influence which is moved not, but moves. POETS ARE THE UNACKNOWLEDGED LEGISLATORS OF THE WORLD.
Percy Bysshe Shelley
1821

Posted by Chris Faiers/cricket at 19:39